The History Behind White Lilies

While springtime is generally associated with blooming flowers, one plant in particular stands out during Easter: the lily. This pure white, trumpet-shaped bloom has come to symbolize the holiday and its religious aspects. But what exactly is the relationship between Easter and lilies? Let's find out.

The Lily in Christianity White has long been associated with purity in the Western world, so it's no coincidence that a pale flower became revered as a representation of perfection. Christendom has a number of stories explaining the origin of the lily. One legend says they were born from the tears Jesus shed while praying in the Garden of Gethsemane. Another explains that they grew from Jesus's blood as it fell from the cross. Still another says lilies were created by Eve's tears, which fell to the ground as she left the Garden of Eden.

In addition, the lily has ties to Mary, Jesus' mother. Painter John William Waterhouse depicted a scene of the angel Gabriel presenting Mary a bunch of lilies while telling her she would bear the son of God. This famous painting was created in 1914. What's more, some say that lilies were found in Mary's grave in place of her body.

Even Jesus' followers are linked to the flower, as lilies are often called "white-robbed apostles of Christ."

Traveling Lilies
How long we've associated lilies and Easter is unclear. However, we do know more about how the lily came to the U.S. This flower originated in Ryukyu islands of Japan and was also cultivated in Bermuda until disease largely destroyed the crops. Numerous accounts tell of Americans finding these flowers abroad and bringing them back to the West Coast, where conditions are ideal for growing the blooms. The U.S. Department of Agriculture notes the plants were grown from seeds and distributed in 1903. Now, 95 percent of the lilies bought in the U.S. and Canada come from the American northwest.

Decorating for Easter
No matter how Easter lilies came to the U.S. or became associated with Christianity, one thing is clear: These flowers are stunning symbols of rebirth, purity and beauty. They'll make the perfect addition to your Easter decorations, so be sure to order your bouquet in time for the holiday. FindaFlorist.com can help you discover a local florist so you can get the freshest blooms possible. 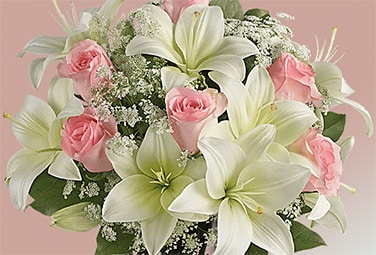 Back to Ask a Florist